By Rodney Harrell, PhD July 12, 2012
The Washington Regional Association of Grantmakers sponsored an affordable housing tour of Langley Park, Md. today. This community is a classic inner-ring suburban community: subdivided and built in the decades after WWII, and has been a source of market-rate affordable housing for half of a century. Racial demographics have changed greatly over the years, and since the 1980s, large numbers of immigrants have settled there, including many from Central America. Today, the community is majority Latino, hosts a range of multifamily housing, many international influences, and a bustling commercial center. It's also one of the hubs for the proposed "Purple Line" light rail system that would connect it to DC's Metro subway system - the nearest Metro stations are currently about 3 miles away. Langley Park sits at the intersection of two counties, with multi-lane state highways serving as main streets. Pedestrian safety has improved in recent years, and many bus routes serve the area, but rail is the missing piece of the transportation network in the region.


I spent most of my childhood not too far from the area, so I have also observed the changes in a personal way. Before my time, Langley Park was majority white, but by the 1970s and 1980s, became mixed racially as African Americans moved to Prince George's County in great numbers, and immigrants flocked to the area. Relatively low housing prices, proximity to Washington, DC, and an ever-changing roster of businesses to meet local needs are all draws to the area. Gone is the Hot Shoppes restaurant that once anchored the intersection of University Blvd and and New Hampshire Avenue - now a Taco Bell sits in its place. Very few businesses from 20 years ago remain, as local, regional and national stores have come and gone as tastes and economic conditions have changed. Names such as Roy Rogers, Hechinger, and Waxie Maxies have been long forgotten, and current businesses such as Pollo Casero and Halal Meats betray the international influence on the area today. For many, Langley Park is visually defined by Tick-Tock liquors and its giant clock-themed facade, which has thrived at another major intersection in Langley Park since about 1960. It may be the only business in the area from that long ago that is still operating - I suppose that its product base has appeal regardless of demographic change. (The owners were indicted in a corruption case with the last county executive in 2010, a subject that I will have to return to in a future post.)

Today's event was about housing for low-income Latino families in the area, complete with a tour of a few apartments and the grounds on a blistering July day. It gave me some valuable perspective on the range of issues that the community faces today, including the high level of need for housing at relatively low price points, the fear of gentrification, the challenges facing immigrant households who fear reporting conditions to authorities for a range of reasons, and on the bright side, the new direction from county leadership. It was a great chance to visit some affordable housing sites, talk with some residents, and hear from local officials that are working with the area.

The area is preparing for the eventual construction of the Purple Line, and the largely Central American tenants in nearby apartments are doubly concerned. On the one hand, worried about being eventually priced out, and on the other hand, worried about the poor conditions in some of their apartments today. For those whose immigration statuses put them in jeopardy, a complaint about substandard housing conditions may appear to be a risky move - it feels safer to lay low. 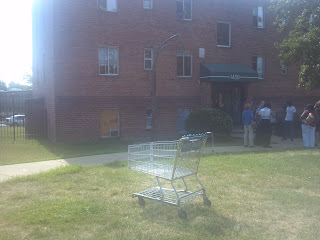 One big lesson from the tour was that while some local advocates are worried about the threats to affordability from TOD (transit oriented development), more education needs to be done. Equitable TOD is possible and it could benefit low income residents. Transit lines and accompanying property value increases are not solely a threat for low income people, but are also an opportunity for a community to meet several goals at once (Potentially including the preservation of affordable housing, economic development, improving transportation access, etc.)

Prince George's County, Md. has some (but not enough) policy tools in place to truly serve this population, and that lack of tools is largely due to negative perceptions about affordable housing. Anyone working in the area has heard the complaint that "we have enough affordable housing" enough times that it may seem to be a second county motto. This perception, along with a property tax cap (known as TRIM) provide some key limitations. One of the speakers on the tour, Cheryl Cort of the Coalition for Smarter Growth, describes Prince George's as a "Middle-class county in an affluent region," an apt description of the dynamic that helps to shape local politics and policy development. Housing values in the county are generally lower than elsewhere in the region and tome, this creates a community where many people and neighborhoods are striving to achieve stability, be they working class, middle-class, or upper middle class. This then supports a culture where the preservation or creation of wealth, amenities and economic development are of great importance, and many residents fear "backsliding" if neighborhoods decline. This impacts local politics, the perceptions of local leaders, and the policies that they implement.

This would explain what motivates local leaders to eliminate or prevent the adoption of several affordability policies in the past, including an inclusionary zoning (IZ) ordinance that was eliminated in the 1990s (legally named the Moderately Priced Dwelling Unit Ordinance). Inclusionary zoning can be a great tool in a TOD area that will see a great deal of redevelopment, as some versions allow the county to trade density bonuses (i.e. more units/bigger buildings) to developers if they made sure that a certain percentage of housing units were reserved to people of low or moderate income (other versions require the inclusion of affordable housing). This gives officials a tool to include affordable housing in new construction projects and uses the momentum from development to to lead to more housing. 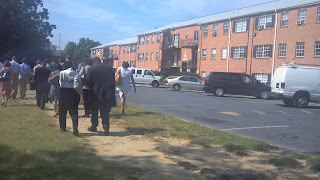 Although Langley Park has many apartment buildings, it is still a relatively spread-out area - most buildings are no more than a few stories tall. Due to the low density in Langley Park, I anticipate that in another 20 or 30 years, the area will look quite different - if the light rail is built and land values rise, the strip malls and low rise apartments of the post-WWII era would not be as economically attractive to landowners, and new, bigger (and hopefully better) buildings will be built if zoning allows. Ideally, this economic momentum could be used to create more housing options for people at different price points. My dissertation discusses the problems that face the preservation of affordable housing in that county, and goes into much greater detail than I can here. On the tour, county officials seemed hopeful that attitudes towards affordable housing among county residents/voters have improved. I'm not sure about that, but I wish them luck.

(See the AARP PPI Publication Preserving Affordability and Access in Livable Communities for more on solutions for places like Langley Park.)

For more on Prince George's County, my PhD dissertation "Understanding Modern Segregation: Suburbanization and the Black Middle Class" focuses in part, on the county as a whole and several communities within it (not specifically Langley Park) and the residential choices that local homeowners made.