Inauguration Day - Should It Be Today? How Distrust of Lame Ducks Changed Our Calendar

By Rodney Harrell, PhD January 21, 2013
There's been a great deal of discussion about the 2nd amendment lately, but on this Inauguration Day, I'm thinking about the effectiveness of a different amendment - the 20th. For those without a pocket copy of the US Constitution handy, the 20th Amendment covers a few things, including presidential succession in cases where the President-Elect dies before taking office, but my questions surround a different part of the amendment - the first two sections moved the Presidential Inauguration from March 4 to January 20, and established January 3 as the first day for a new Congress.

The inauguration date was moved to January after concerns that the original date was too old-fashioned for a modern America. The logic was that modern transportation and communication (in 1932-33) meant that a new administration and Congress could take office more quickly than they could in the 18th century - moving the dates to January would allow our government to respond to national emergencies better, and lame duck sessions are hampered by the fact that some are uncomfortable with the idea of recently defeated officials making actions after a "change" election.  One of the examples often given to justify the amendment is the secession of Southern states upon Abraham Lincoln's election in 1860. Between the following January (what would have been inauguration date today) and his inauguration in March, seven states had seceded, a Confederate Constitution was created, and federal forts were seized.  The logic was that this growing crisis could have been more effectively managed had a newly elected President and Congress been in place, and not simply a lame duck group.  For several reasons, the outgoing president did not feel empowered to take action to stop the secession, and the Civil War was the result. 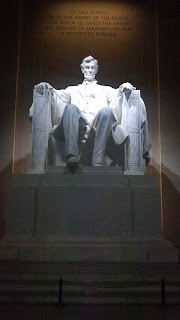 I've never heard a historian accuse James Buchanan of being a very effective president, particularly after states began to secede. He famously said to Lincoln on that Inauguration Day in 1861 that "if you are as happy entering the presidency as I am leaving it, then you are a very happy man" - he had not done much to keep the nation together. To me, that reveals that the problem was not the date of inauguration, but was a particular president's strategy and belief in federal authority.

At the other end of the Civil War is a case where Lincoln himself used the opportunity created by a lame duck Congress effectively - was able to get the 13th Amendment passed, leading to the eradication of slavery from the United States. The "win" from this legislative victory was one of the most important pieces of legislation in the nation's history. It was a story so powerful that the recent blockbuster film "Lincoln" captures that time of his presidency. Through various means, the President and his allies were able to convince a lame duck Congress, including several Democrats who had been recently voted out of office, to pass the 20th Amendment in January of 1865. (Democrats lost almost half of their House seats in that November 1864 election).

Let's fast-forward to a few weeks ago: the last Congress was famously ineffective, but in its final days was able to pass a bill (ATRA) to address the Fiscal Cliff crisis. While it wasn't the "grand bargain" that many hoped for (it was a temporary fix for many of the problems that were related to the "cliff") ATRA could not have been passed earlier.  Last fall, many hopes were on the lame-duck session as the one opportunity to pass key legislation from that Congress - the combination of the looming year-end deadline and the freedom from repercussions for the 39 Republicans that were leaving the House meant that a compromise bill was possible.  A similar situation gave us TARP in 2008 - it was controversial, but it was major legislation. The repeal of "Don't Ask, Don't Tell" in 2010 was another lame duck achievement. In this era of paralyzing partisanship and unproductive Congresses, lame duck sessions are rare opportunities - a time when many veteran elected officials are free to vote their conscience and be productive.

One could argue that our reactions to major crises were harmed by the extended time between Election Day and Inauguration Day prior to the 20th Amendment, including the financial crisis that began the Great Depression. In fact, that event was largely responsible for the ratification of the 20th Amendment. The counterargument is that poor decision-making and a perceived lack of legitimacy were the real issues. If lame duck Congresses are able to create legislation on issues that were difficult or impossible to address before the last election, we may have an unintended negative side effect from this efficiency-focused amendment.

The related argument for the amendment is a philosophical one - that major pieces of legislation cannot be "the will of the people" if they are victories achieved with the votes of recently defeated legislators.  I disagree with this last point - as you might have gathered from "Ballot Measures: Lazy Legislation or True Democracy, Part I and Part II," I think that some "good government" reforms go too far - we need to elect leaders and who will get all of the facts and make the best decisions that they can from day one to the last hour that they are in office - in other words, they need to lead. Lame duck decisions are often criticized, but I know of no other job where it would be frowned upon to do your job while you remain on duty. We should ask no less of our legislators - these are our elected leaders and should be given room to lead while they are in office. I haven't heard of any serious proposal to eliminate lame duck sessions altogether - we acknowledge that new leaders need some transition time to learn about their new office before starting, and new legislators with little understanding of their offices and few relationships with their new colleagues cannot be expected to be as productive as their outgoing colleagues. I am wondering if we harmed legislative productivity by altering the mix - we lost a couple of key months where veteran leaders could be at their most productive.

Would a repeal of the first two clauses of the 20th Amendment fix all of the problems that contribute to the modern-day ineffectiveness of Congress? Would it always lead to a more effective legislature, especially in cases where there is a change in the party holding the presidency or a majority of either house in Congress? No, but this case reminds us that we should take all of the long-term consequences into account when we change the way that we do things.

Not only that, but changing back to the March 4 date would lead to much better weather on Inauguration Day. Parade watchers and observers would certainly benefit from that - it's currently 37 degrees in downtown DC. For those along the parade route (and not in a warm box like the one pictured up top) stay warm and have a Happy Inauguration Day.  Happy Martin Luther King Day as well - since that holiday is about hope for America's future, my hopes are that we have a productive 113th Congress and a productive second term for President Obama. We certainly have problems that need to be solved.

Do you like January Inaugurations?  Do you trust lame duck sessions of Congress and the legislation that they create?  Leave a comment below or @DrUrbanPolicy.

What Is a Livable Community, and How Do We Measure One?

By Unknown April 25, 2014
Today, I kicked off AARP Public Policy Institute's Livability Index project with a blog and two papers on new project webpage: bi.tly/LivIndex.  The PPI blog, "What Is a Livable Community, and How Do We Measure One?" introduces the project to the world.