By Rodney Harrell, PhD June 27, 2020
I applaud the Princeton University Board of Trustees' decision yesterday to remove the name of Woodrow Wilson from the policy school and residential college that were formerly named for him. While this decision may appear sudden to some, the Board has carefully deliberated on this decision over a number  of years. For alumni like myself, the school's reputation as a place of a world-class education in public policy has long been at odds with the mixed legacy of its eponym. As the board states, "Wilson’s racist thinking and policies make him an inappropriate namesake for a school whose scholars, students, and alumni must be firmly committed to combating the scourge of racism in all its forms."


Over the years, alumni have expressed varying levels of pride, discomfort and shame over the decision to continue this honor of having one of the nation's foremost policy schools named after Wilson.  He was the president of the university, a governor of the state and President of the United States, and he had great and lasting policy achievements, even winning a Nobel prize for creating the League of Nations. Simultaneously, his racism was strong and clear, even for his time. He oversaw the formal re-segregation of the federal government to "protect" African Americans, a claim that was insulting to civil rights leaders of the time, including those who had formerly supported him in hopes of progress.

As William Monroe Trotter says in the quote that now adorns the sculpture in front of the School's main building, "Never before was race prejudice and race distinction made official under National Government, and never before incorporated in a National Government policy," as at that time, two generations of "Afro-Americans and other American employees have been working together, eating at the same tables, and using the same lavatories and toilets."

All of that changed with Wilson's administration and his public rebuffing of Trotter. This was in November of 1913 - decades after Reconstruction and other policies integrated the  government and moved the nation forward. Wilson and those who shared his outlook turned the clock back on civil rights by decades. (It's no coincidence that the peak in construction of Confederate statues and the release of Birth of a Nation was all within a couple of years of this date.) The nation's progress on civil rights was threatening to many, and symbols, and policies and actions were all used in an attempt to keep African Americans "in their place."

Now, more than a century has passed. As an African American graduate of what was the Woodrow Wilson School of Public and International Affairs, and as a former chair of Princeton's Black Graduate Caucus, I have long made peace with the fact that Wilson likely would not have wanted someone who looked like me to be a graduate of the school that bore his name. On the contrary, I have taken great pride in the fact that I use the policy education and reputation of "his" school to achieve the professional successes that I have achieved since that time, including articles on this blog, and my policy work (both in government and with social mission organizations) to advance the causes of equity and expanding choice.

Earlier this very week, I participated in a public town hall discussion on enhancing Black homeownership. In it, I shared my love of the goals of the federal Fair Housing Act: eliminating racial discrimination in housing and "affirmatively furthering" fair housing, which requires multiple levels of government to fight racial discrimination by promoting housing choice and to foster the creation of inclusive communities. Although recent protests have made it clear to all that racism continues to exist in many forms, I strongly believe that public policy is, has been, and will continue to be one of the main levers to move society forward.

While civil rights leaders like Trotter initially had high hopes for President Wilson, "fair housing" was the opposite of what he stood for, and that act took over five decades to come to fruition.  I imagine that both men would be shocked to know that more than a century after their infamous conversation, I and other alumni (especially the Black alumni) would be using degrees from Wilson's school to help support those goals. I can't help but smile as I picture both of their faces making that realization.


The fact that I have used my education from a school built on Wilson's name to help me support policies that attack the same racial disparities, racism, and legacy of historical discrimination that he and others exacerbated has given me great satisfaction over the years. That pride will be not be lessened as I prepare to change my LinkedIn page and resume to reflect the newly named Princeton School of Public and International Affairs (SPIA). While Princeton has had its own racial challenges over the years, this decision to rename the school gives me confidence that the current administration takes racial issues and the concerns of alumni seriously.

I hope that the sculpture confronting Wilson's complex legacy in front of Robertson Hall (and quoting critics such as Trotter) remains, and that this is not the end of changes in the policy school. I give my strong support to those alumni who are pushing for changes to the curriculum and faculty to better prepare students to help solve the issues connected to racial injustice in all of its forms, both past and present.


To my fellow alumni: I know that there are a range of perspectives on his overall legacy, and your personal feelings about these changes will vary from highly positive to agnostic to highly negative. At minimum, I hope that we all can understand the painful, harmful legacy of some of the policies that Wilson enacted and support the work to overcome them. You may be losing the "Woo" nickname, but we will never again have to defend why our school is named after someone whose legacy is so painful for millions.

Symbols are important, and while no one is perfect, we must be careful in who we choose to honor.  Importantly, removing these honors is not the same as "removing history." Rather, it is a sign of a healthy appreciation for history, and the knowledge that legacies are not permanent.  Our understanding of actions, intent and impact is rarely perfect or universal, and new information, realizations or perspectives must be considered. As a result, a school or military base or football field or other namesake may need to have a new name as the full picture becomes clear to all. As Princeton's president said today:

Princeton honored Wilson not because of, but without regard to or perhaps even in ignorance of, his racism... That, however, is ultimately the problem. Princeton is part of an America that has too often disregarded, ignored, or excused racism, allowing the persistence of systems that discriminate against Black people. When Derek Chauvin knelt for nearly nine minutes on George Floyd’s neck while bystanders recorded his cruelty, he might have assumed that the system would disregard, ignore, or excuse his conduct, as it had done in response to past complaints against him.

I could not have said it better myself.  That ignorance of the impacts of racism is a problem that can and should be be fixed. Princeton is not the only community that should listen to varied voices, learn and reassess who we choose to honor, and take actions to address the injustices that face many of our fellow Americans. We must put "people first," which requires us to understand and consider how different groups are impacted by policies and actions and then find the best path forward. Anything short of that is policy malpractice.

Wilson's legacy, both in international affairs and domestic policy, is full of lessons, both good and bad, and should be studied. Statues, buildings and schools are long-lasting honors, and while all history should be studied, every piece of our history is not equally worthy of our highest forms of celebration.

No accomplishment wipes away the flaws of the individual, but every action adds to each person's full story.  We owe it to ourselves and future generations to respect that full story.

We cannot let the fear of losing our history limit us, and I hope that this and other examples help lead the nation in this healthy re-evaluation process. To those of us who have spent generations fighting systematic injustice, and especially those who hoped to get a recognition that the lives of Black people matter just as much as others, the tradeoffs are more than worthwhile.

This is the urgent issue of our time. 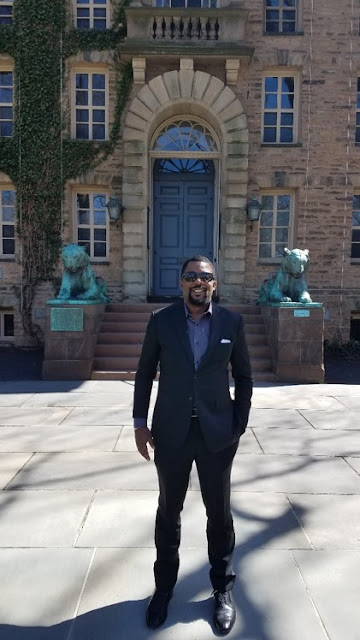